Spirituality and Dementia
Causes and Risks for Alzheimer's, Stages of Alzheimer's

The cause of Alzheimer’s is not yet known. What is observed is a build-up of proteins - plaque due to a protein called amyloid and tangles due to a protein called tau. In the photograph taken under a microscope, the microscopic whitish plaques are generally outside the cells of the brain. They are the consistency of cooked egg white, similarly coagulated proteins. The tau protein deposits are inside the triangular cell bodies shown in the photo, causing them to appear darkened. It is not known if the plaque and tangles are what causes the illness, or if they are a byproduct of the illness – is the brain making these proteins to try to protect itself from the real cause? Will removing plaques and tangles by a drug, for example, remove the symptoms? The answer is not yet clear.

The plaques and tangles cause death of the neurons, and with loss of many neurons, the brain shrinks, as can be seen in the photo comparing a healthy versus advanced Alzheimer’s brain on autopsy.

Alzheimer’s Disease can be understood to occur in three stages. The early stage is characterized byThe pastoral concerns at this stage may be the intense grief and anxiety of the person developing dementia and their loved ones.

What remains is that the person is often still at home, with care-giving from family or in-home services. Assisted living might also be appropriate. The person still recognizes and enjoys family, friends and church. Traditions can still be carried out, for example at holidays, and dinners out can still be enjoyed. A few professionals in the field have noted that on occasion, a person can “blossom” in the early stages, as they leave behind burdens that were weighing them down in the past. Note that 80% of Alzheimer’s patients are living at home.

The brain slice corresponding to the early stage shows the tau proteins (brown) damage in the brain. The hippocampus is beginning to be affected (photos from Sweatt, David, Mechanisms of Memory, Amsterdam: Elsevier, 2010, p.296.) 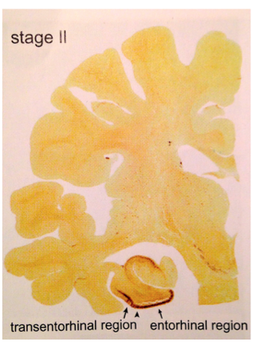 From:  Sweatt, J.David, Mechanisms of Memory, Amsterdam: Elsevier, 2010
The middle stage is characterized by:
What remains is that the person might still be at home, with full-time care-giving, or Assisted living. The person sometimes recognizes loved ones and enjoys reminiscing with old photos. They may still enjoy food (perhaps finger food works best as managing cutlery becomes difficult). Socializing, singing and reciting scripture may be appropriate. This stage has its challenges but is not without moments of joy, laughter and spirituality!

In the middle stage, more regions of the brain are affected by the tau proteins. 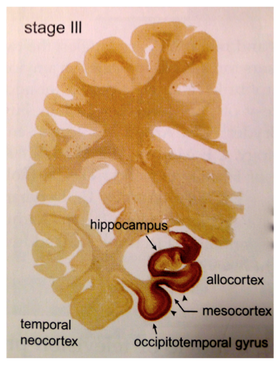 The late stages are characterized by:


What remains are things like love and spirituality, as well as the enjoyment of touch and music. There are occasional coherent sentences that may carry a great deal of meaning and are worth waiting for! As the old hymn says, “And the things of Earth will grow strangely dim…” We don’t know what experience the person with late stage dementia is having.

In the late stage, the wrinkled folded layer the cortex (the thinking brain) is damaged. 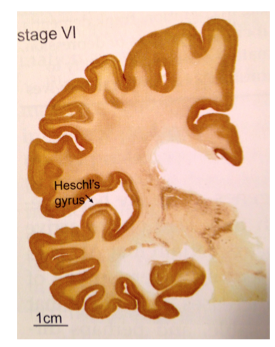 Some statistics about Alzheimer's Disease

Alzheimer’s disease affects 1 in 9 people 65 and older in the U.S., a total of 5.3 million people. The greatest risk factor for Alzheimer’s is age, but it is important to note that it is a disease and is not caused by age. Of those with Alzheimer’s disease, about ¾ are over age 75. At 90, the chance of having dementia is 50%. While there is always hope for a cure, at this rate the incidence is expected to triple by 2050 because of the expected increased number of elderly in the U.S.

From:  2016 Alzheimer’s Disease Facts and Figures, Alzheimer’s Association
Alzheimer’s is related to aging but it is NOT normal aging!  It should be understood as an illness that should be treated by a specialist – a neurologist or gerontologist, and not only a family doctor.

The cause of Alzheimer’s is not known, but it is believed to be caused by multiple factors. The only inheritable variety occurs in a very small number of cases (under 1% of cases) that usually results in onset before age 65. In addition, ¾ of people with Down syndrome over the age 65 get Alzheimer’s Disease.

Aside from these cases, the greatest risk seems to be age (but again, this is not normal aging!) Additional risks include family history and the occurrence of the APOE-e4 gene. 40-65% of people with Alzheimer’s have 1 to 2 copies of this gene. If your parent has Alzheimer’s, it does not necessarily follow that you have the gene. Additional risks include a history of traumatic brain injury, such as falls, car accidents or sports injuries.

Some risks for Alzheimer’s are modifiable. We already mentioned the value of daily exercise, which is extremely beneficial, up to a 50% effect!  In addition, it is thought that diet is extremely important. Good fats (walnuts, avocado, olives, salmon, etc.) are believed to be much preferred fuels for the brain than sugar or bad fats. Lean proteins and a great deal of vegetables, low sugar and low carbohydrates, and adequate hydration are all considered best practices. Some of these diet practices may result in a healthier gut microbiome, tied by some to brain health. It is important to manage cardiovascular risk factors, as these also benefit the brain (diabetes, obesity, smoking and hypertension.) Good sleep habits and management of stress and depression are important. Social and cognitive engagement are important. Managing these factors does not guarantee that one will not get Alzheimer’s (and may only delay it) but Norton estimates Alzheimer’s cases worldwide could be reduced by one third if these factors were controlled.
From:  2016 Alzheimer’s Disease Facts and Figures, Alzheimer’s Association and Norton et al. Lancet Neurology 13 (2014) 788-794. 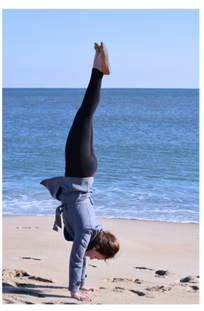 It is important to maintain good health habits in middle age because the amyloid plaques are seen a decade before diagnosis. 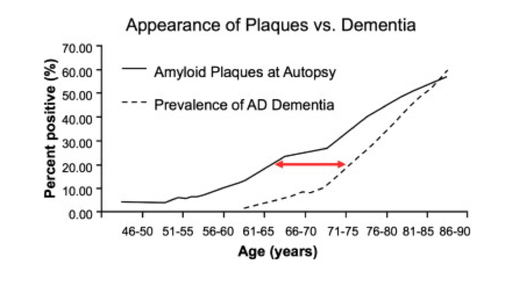