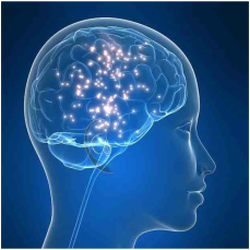 Dementia, Alzheimer’s and Normal Aging – some definitions
Dementia is a term that describes a group of symptoms including loss of memory, judgment, language, complex motor skills, and other intellectual functions – caused by the permanent damage or death of the brain’s nerve cells, neurons. “Dementia” is a symptom. It’s a progressive mental deterioration.

There are many illnesses that cause dementia – Alzheimer’s Disease is responsible for about 60-80% of dementia. Other illnesses include Lewy Body disease, vascular dementia, prefrontal dementia, stroke, Huntington’s, Parkinson’s, Creutz-feldt Jacob, Downs Syndrome, alcoholism, and AIDS. We’ll focus on Alzheimer’s.

Most are aware of the symptoms of Alzheimer’s involving memory, but there are symptoms in other categories as well: 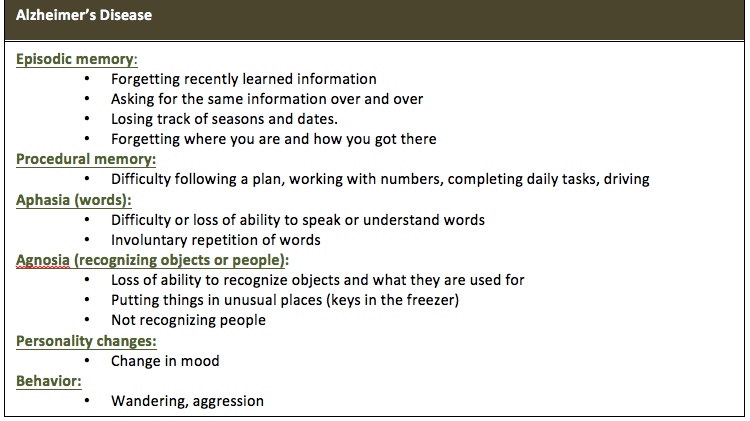 There is some normal memory loss with aging. This is because our circulation, sleep and repair mechanisms are less efficient as we age. The memory-related structure in the brain called the hippocampus loses 5% of its cells every decade due to normal aging, starting around age 25!

In between Alzheimer’s and normal aging is a condition called Mild Cognitive Impairment – problems with memory, language, thinking and judgment. You may be aware that your memory or mental function has “slipped” and others may have noticed too. But these are not severe enough to significantly interfere with your day-to-day activities. Many people over age 65 have MCI and some may go on to develop Alzheimer’s but many do not. In some individuals, it reverses or remains stable.